Political campaigning was one the very challenging project that we have ever taken. Let me introduce the project to all of you.

In Gujarat territory of India, from where our current Prime Minister Mr.Narendra Modi Ji has initiated his journey would likely to have BJP government for the election. It seems that no other political party could give at least a good competition, where beating the same seems next to impossible.

In such a scenario for this specific territory, we got this project for Oposition Party Candidate Mr Yogesh Patel From  National Party Congress.

As you could see, it’s not only difficult as it seems but even tough part was the project’s deadline. Political campaigning is effective to the peak at the time of an election, all the candidates participated in an election to show their own path on welfare activities

So let’s get straight to the timeline and numbers.

Time Available: 20 days And we are yet to create any strategy. These 20 days were the toughest. Here is a situation.

One plus point for us was the online presence of the candidate prior approaching us. They already had Facebook page well maintained. But it was not enough. So let’s get straight with strategy. 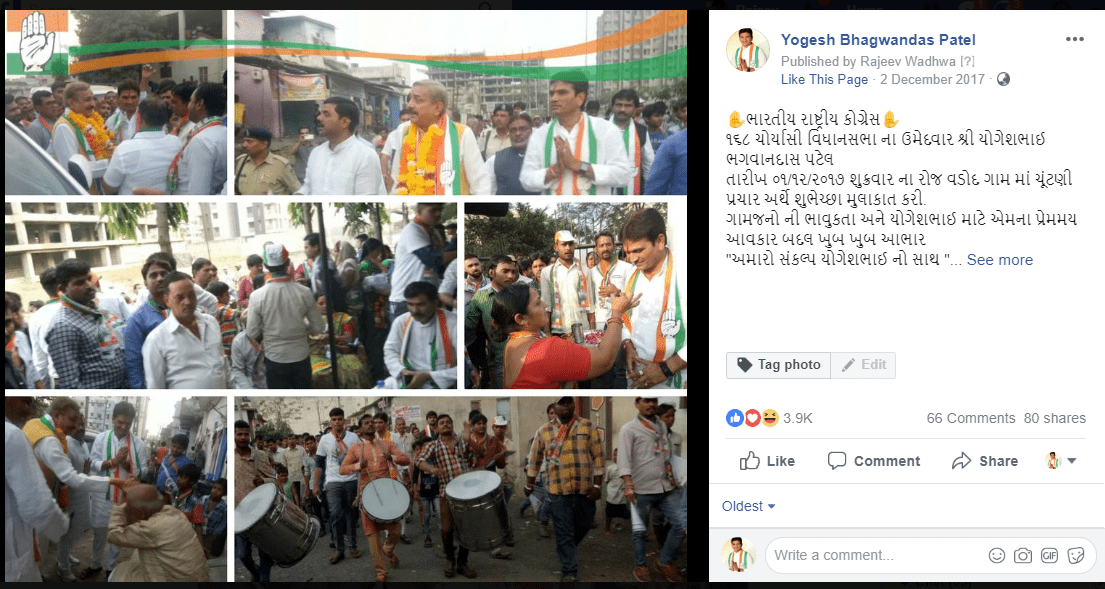 We have started making creatives and engaging activities for this particular page to engage the audience. So when you have enough awareness for your particular brand or political party, it becomes easier to target the people who are already interested or believe in your political activities. So Indian National Congress, a well reputed political party in India has been residing in India since the independence of the country and had a really good Record till time. This simply indicates that the political party must be having a really good fan following or we could say supporters. So which started targeting all those people who support this political party Indian National Congress in the territory of Gujarat election would be taking place.

Here, our target audience was divided into 2 type of people.

The content here could not be something creative all the time as the type of public figure that we are going to promote should not entertain people but share the message with as many people as possible. This will help reaching new people via targeting.

The most important thing that we learn while designing a graphic to get promoted was the language. The election is not something where you can target a specific audience as poor or rich, youngsters and elders, or maybe having specific interest. The only specific feature that we need to target was the location itself. So our target audience was the people who live in Gujarat territory, it is noted that majority of the audience residing in Gujarat territory will be speaking Gujarati language, so the graphic designed also had a message in the Gujarati language that anybody in this particular territory could understand.

You might be thinking that what is the need to target those people who are already in support of yours when you will be guaranteed be getting voted by these people. Instead, you should target those people who should know about your presence and your activities. The reason was simple. Till the time we heard about digital word-of-mouth in many such case studies that you might have come across from us, the same strategy works here as well. The supporters that we already had could help to reach new people in their own connection, giving a chance to express our message. The individual sharing good result in a grand reach without a single penny spent.

So we started with the graphic things, which not only help them for their digital presence but also for the print media. We have captured Movement Live which might not be possible immediately by a print media. You could see the glimpse of the same here. 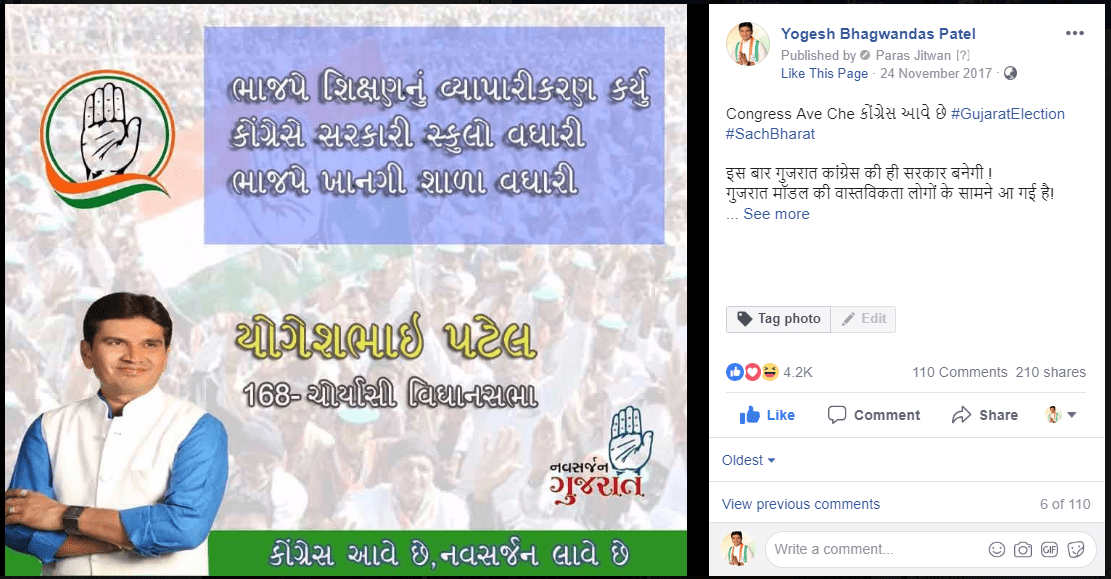 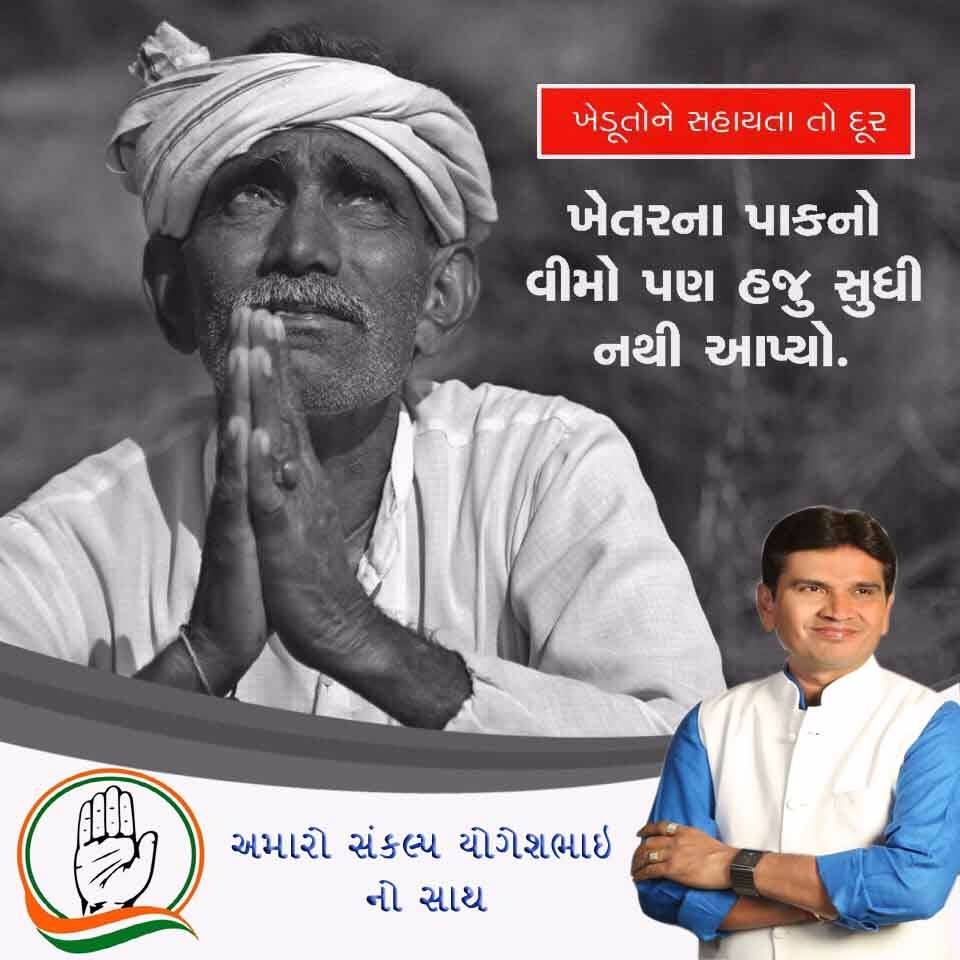 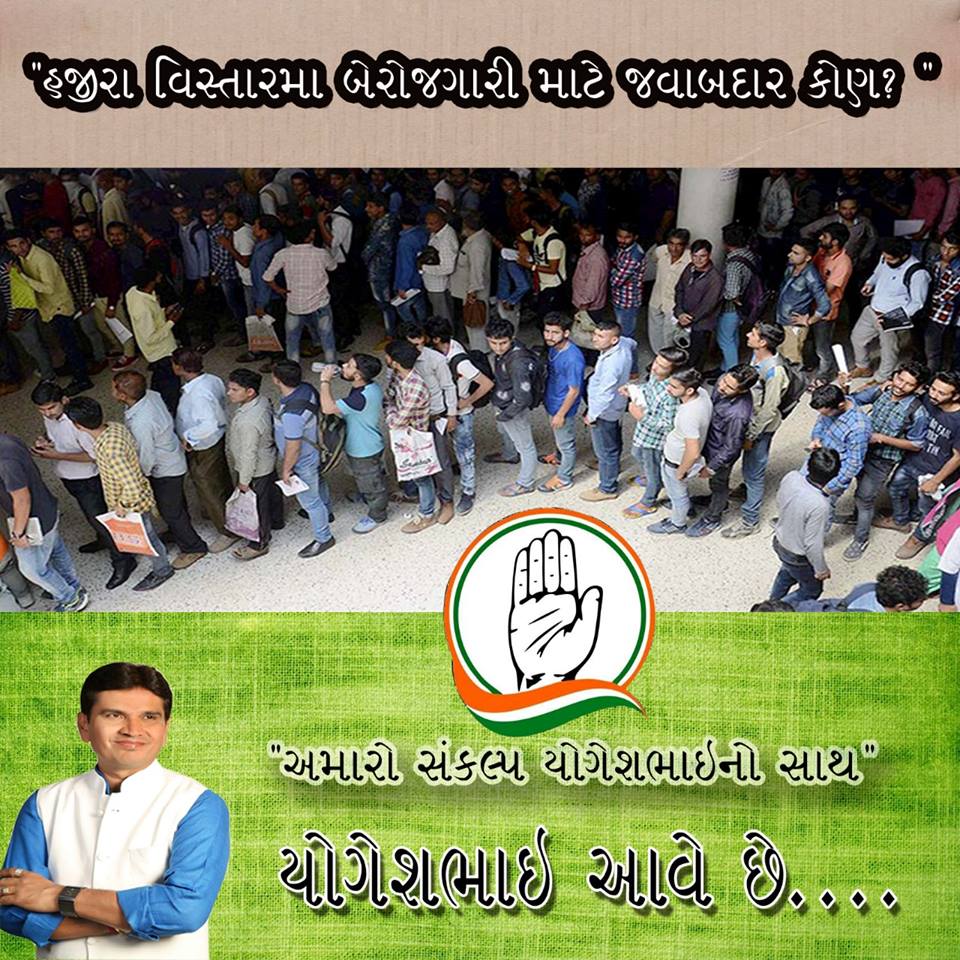 In the political event, no matter how good your words and graphics are, this is not something that always matters. What matters is the actual initiatives that took place. So basically, our campaigning included not only to one way message but also help people engage with us throughout the journey. We have posted the messages to promote a political party, the information for the upcoming rally, the areas to be covered, the live update on each visit, support from the people and also an ongoing initiative for the upliftment. And pictures below you can see the great support showered by the people in the specific region of the Gujarat territory. 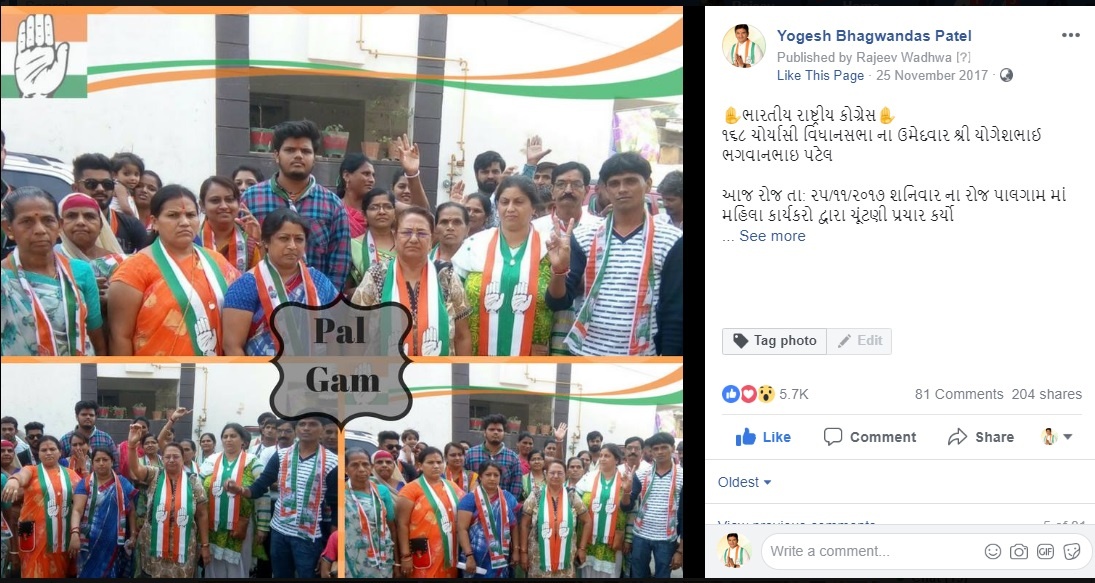 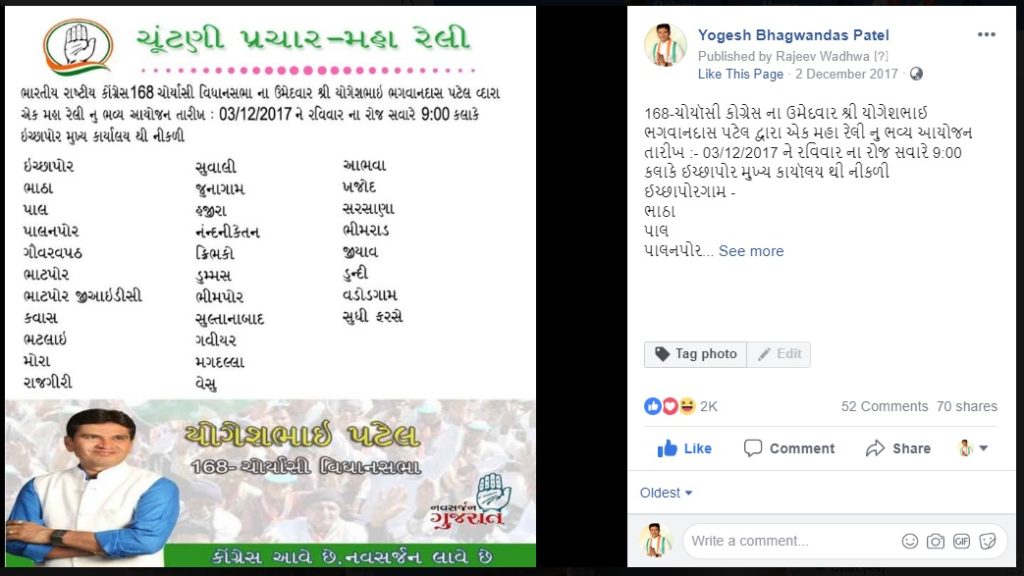 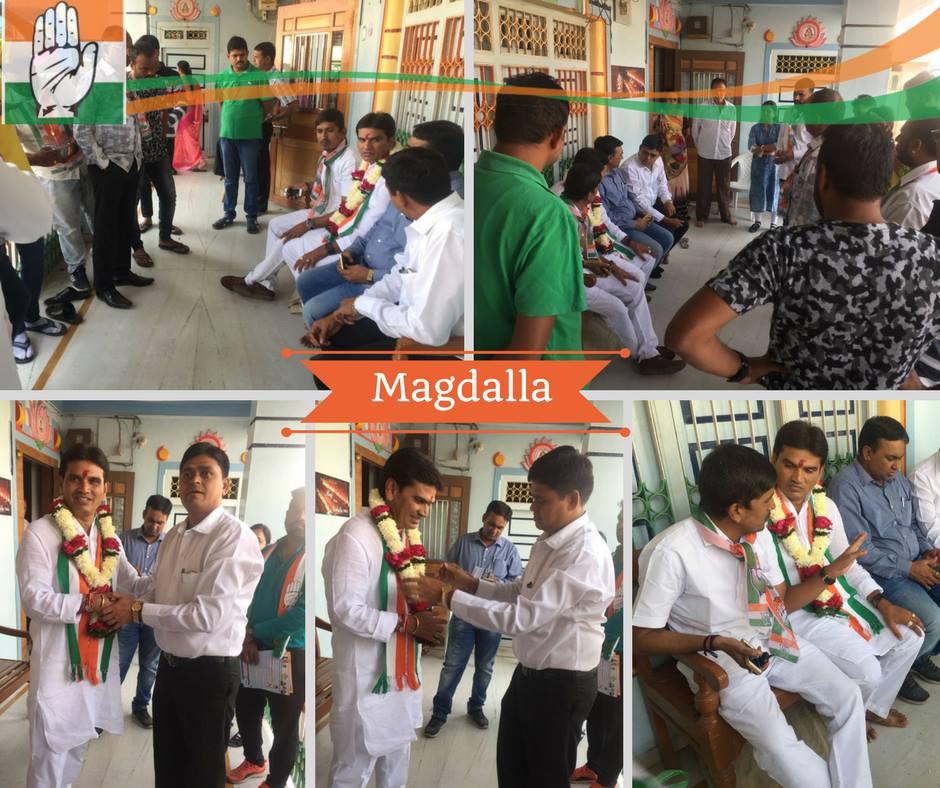 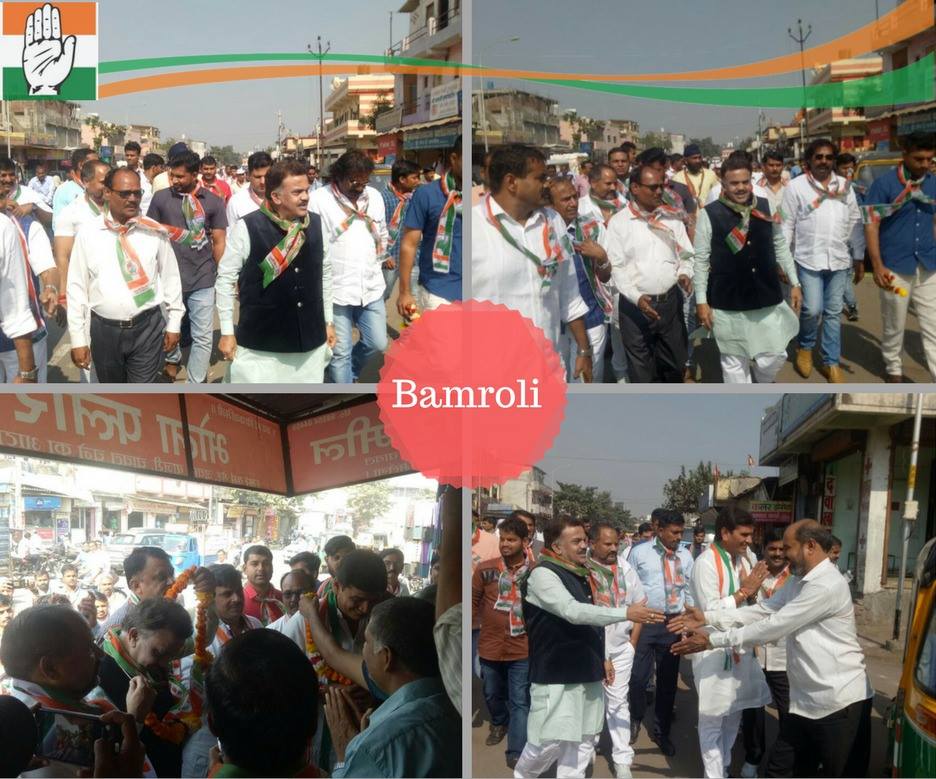 The result to the activities were so intense that even media got involved and we got inked number of times in print media, newpapers and on television platforms. You can see the same here. The activities took a next level making it a live ongoing event. Intense enough to make it look like it’s giving a tough competition to the political party who’d been winning since a decade. 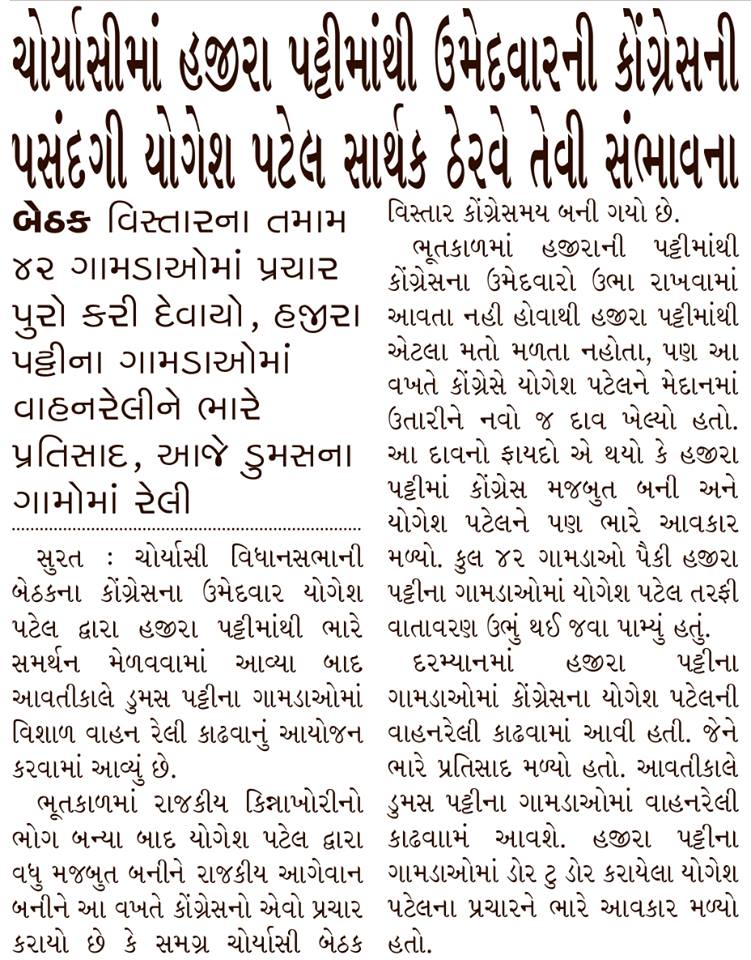 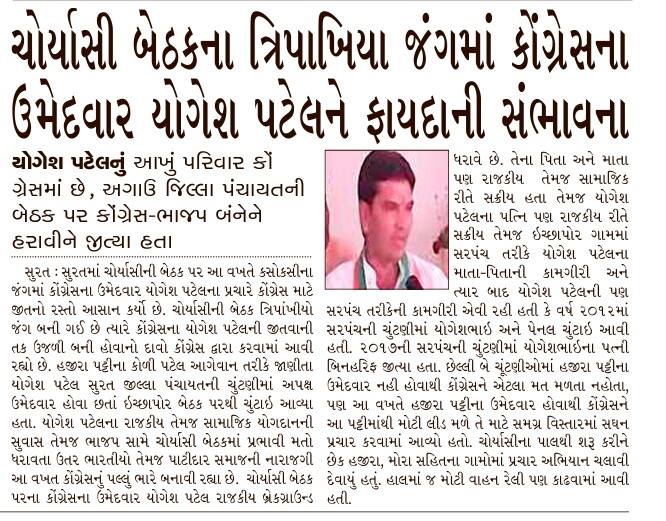 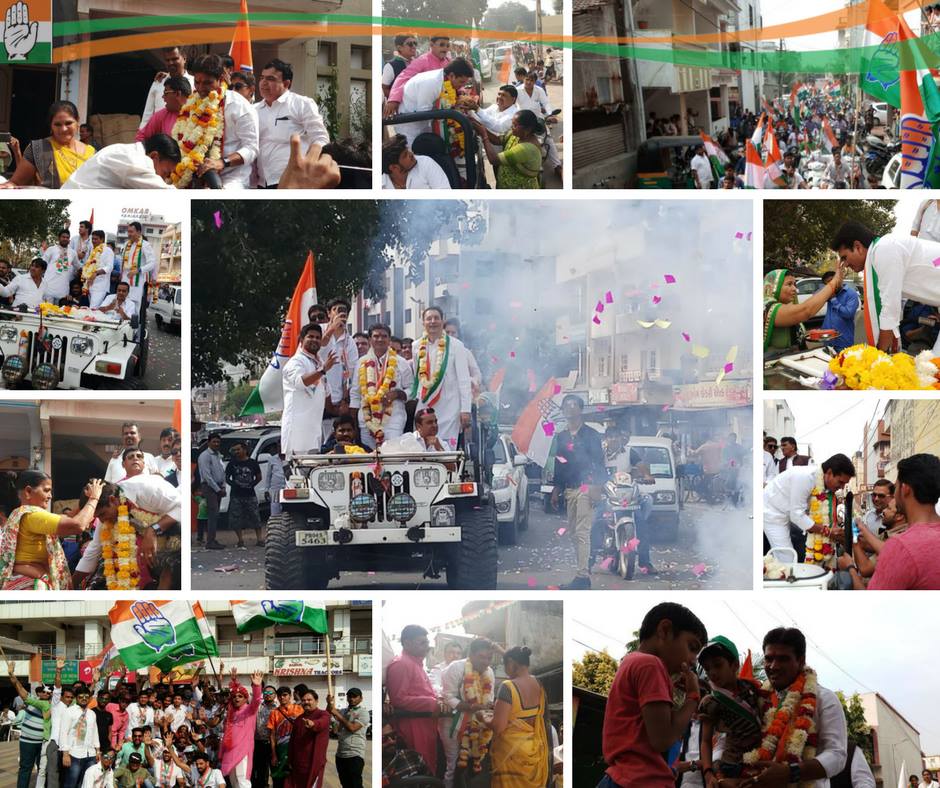 Furthermore, you might have come across this specific feature of Facebook named as “facebook frame”. The feature is specifically be designed to show your support for the particular movement. with the expert team of ours, we have created a frame for the candidate having his picture, logo and a statement unique to the candidate. We have further promoted this particular frame, asking the audience showing support using this frame with their profile picture. These have given a drastic response as many people followed. The result of the campaign has become even transparent. 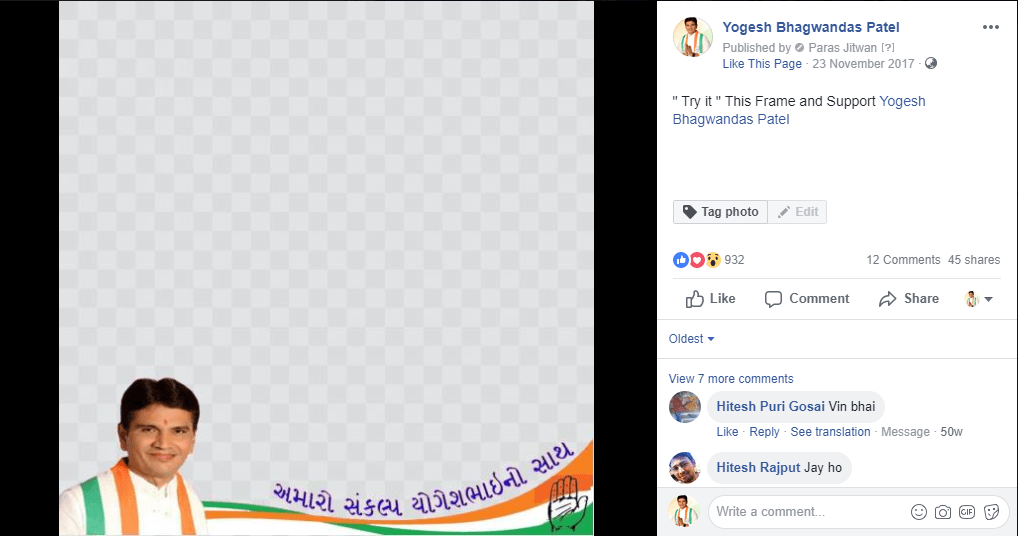 In addition to these, we have also created an interactive video showcasing the activities taken place throughout the journey. In video part we have added an introduction, current issues, interviews and much more. The video has got a really good response with the audience. As far as video is concerned, YouTube is the name, which is closely integrated with video part. So here we have created a channel to show a digital presence on the video platform as well. It’s not only limited to the visual presence on the digital platform of a video but also spreading the message. We have uploaded a video with the help of Keyword research and promote it in the same way. As a result, we start getting visibility in the related keywords. You can see the same in the picture below 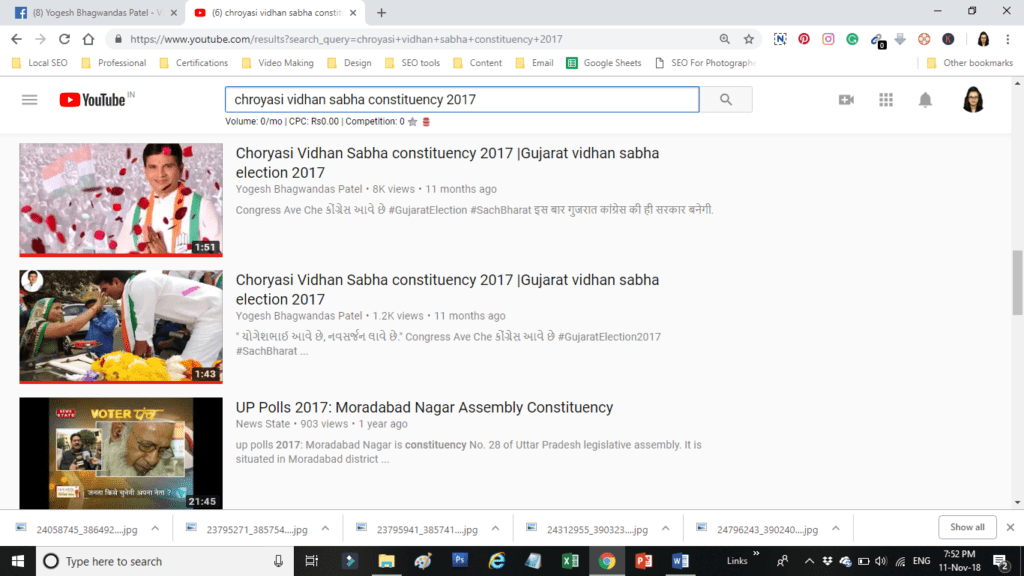 Campaigning, video, post, banner, graphics, interactives and many such engaging activities have been done throughout the period of this 20 days. What is left is the results. So let’s have a look at the results or we can say insights. for the YouTube, you already have seen the number of views and ranking thing. It’s time for Facebook right now. So let’s begin.

In 1st Phase of this article, we have discussed that political campaigning needs a reach. Further, we have also discussed that we would be targeting those people who already follow our political party at a large extent do digital word of mouth. So first we have targeted increasing the page like for the specific page of the candidate. You can clearly see the improvements as on 1st day which is 19th November it was 846, which is on the last date of a promotion 8th of December is 30,465. and the result is impressive because it takes place only in 20 days.

NOTE: Today is considered as the last date selected in the custom dates.

Now let’s have a look at the sources from where we got page likes. In the snapshot attached, we can clearly see that the major traffic in the form of the page like has occurred with page suggestions. You can get to understand how targeting the audience who already followed you helps increasing the page likes for getting the right traffic to your page. 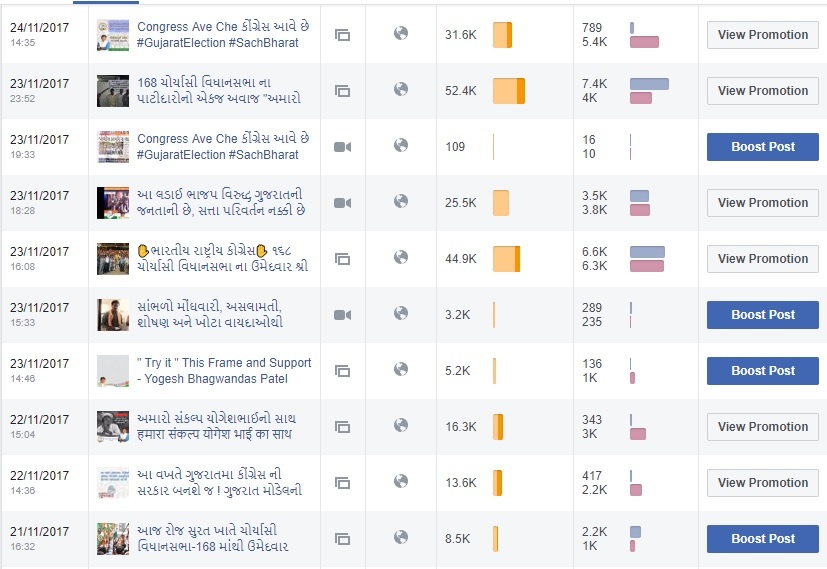 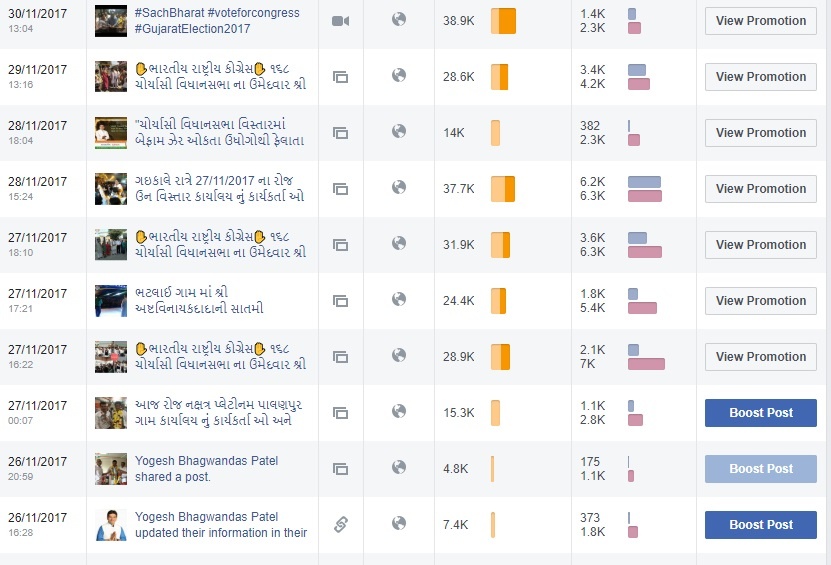 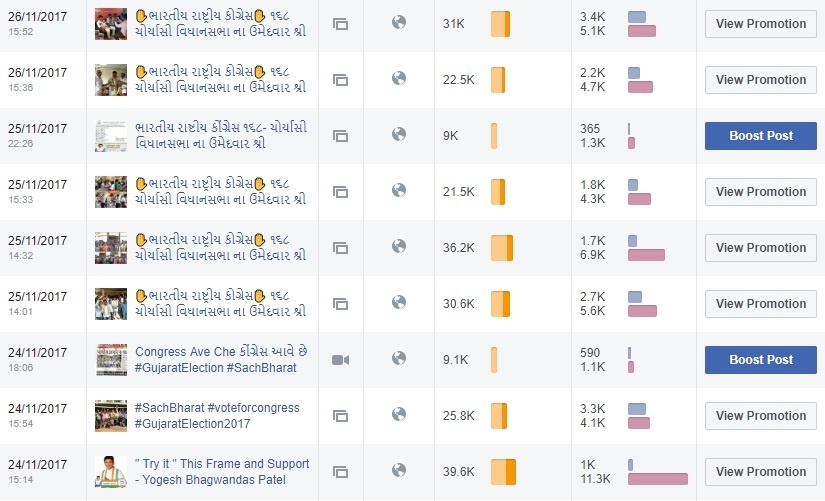 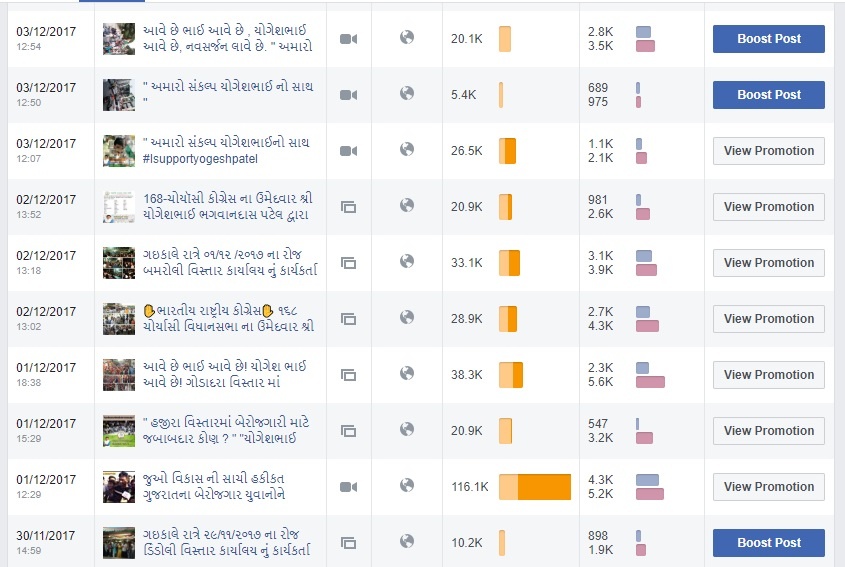 The term reach has been repeatedly used in This article. The ultimate goal to any campaign in the political party would be reaching till as many people as possible spreading your message. This was the most important part of our campaigning. You can see the impressive result in this section. The maximum reach was 1,16,867 people on 3rd December 2017 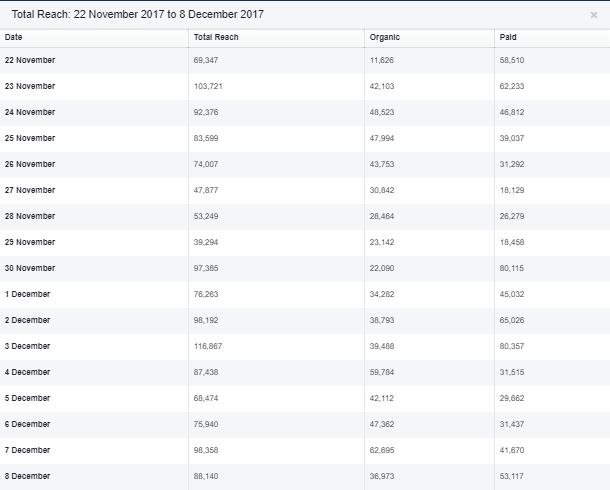 So at the end of this project, we got to learn so many things like localisation of the post, the framing of content and a completely new type of project. One of the most challenging project throughout the time fit maximum responsibility with the minimum time available which was not even a complete month. though it was difficult it was one of the most successful campaignings till time.

Do you wish to know more about campaigning and digital marketing and how it will help you reach your goals in your specific industry? Get in touch with us today.

Fill up the enquiry form or call us on the number given below. If you like the article, do share it in your social connection and help us reach people who are looking forward to the service that we are offering.